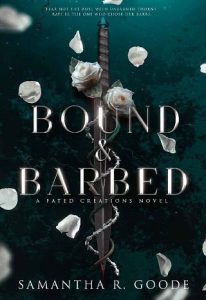 A heinous arrangement. A hidden bond. A hallowed vow.

Evaline Manor was sure she’d lived the worst day of her life when she witnessed the death of her father, and narrowly avoided a brutal attack. Now, she’s trapped in the kingdom ruled by her aunt and uncle, who are desperate to keep her docile and marry her off. She is determined to utilize her combat training to escape Kembertus and flee to one of the neighboring kingdoms.
Maddox Vicor doubted whether the Goddess of Fates would grant him a mate. Most Kova found theirs in their first hundred years. He’d long passed that mark. But on his first day in Kembertus, he catches Evaline pickpocketing his dagger. In one moment his world turns on its axis as he feels the bond snap into place, and Maddox knows that this woman with white hair and inhuman reflexes is his mate.
The illusion of freedom that Evaline holds dear is torn away on her new worst day, when her aunt proposes an arrangement that she would kill to escape. With time slipping through her fingers and danger closing in on all sides, she must do the one thing she fears most in order to save herself.
Evaline must trust a bloodthirsty immortal.