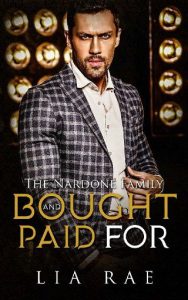 The Nardone family is notorious in Chicago for their brutal control of their crime empire, but the new generation is trying to change things.
Rex Nardone watched his sister walk away from the Familia over a decade ago. He’s never been as brave as her, but now he’s trying to help his cousin Tommy change how things are done. He’s made it his personal mission to shut down a trafficking ring in the underbelly of Chicago.
In order to gain their trust, Rex knows he needs to buy one of these terrified girls, eventually. The thought makes him sick until he see’s Ari on the stage and makes the snap decision that he has to save her. His own desire for her makes him sick until he realizes Ari Sloane is not what she seems.
Ari isn’t scared for herself as she stands on the stage of a slave auction, but she’s terrified for the family she left behind who will never know what happened to her. When the man who buys her takes her home and deposits her in her own room without touching her, Ari realizes that all hope of getting her family back might not be lost.
Nothing is that simple when dealing with the Familia and Ari knows that. What will she be willing to sacrifice to save those she loves? Will it be enough or will the crushing legacy of the Nardone family prove too much for the sparks that fly between her and Rex?

Can anything come of her being Bought and Paid For?