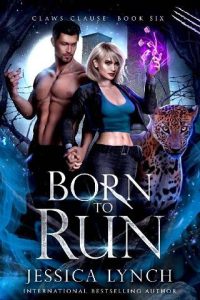 He’ll do anything to save his witch—even walk right into the Cage.

In a world where paranormals live side by side with humans, everybody knows about Ordinance 7304: the Bond Laws. Or, as the Paras snidely whisper to each other, the Claws Clause—a long and detailed set of laws that bonded couples must obey if they want their union to be recognized.
Because it wasn’t already damn near impossible to find a fated mate in the first place. Now the government just has to get involved…
I follow—
In the middle of a fight, Travis Fenton took a deep breath and, instead of launching at an enemy vamp, he nearly fell flat on his face when his jaguar tried to take over.
His beast had recognized the scent on the wind. It belonged to his mate: the stranger fighting alongside Travis and his pack leaders.
Though his jaguar shouted at him to go to her, his instincts led him to protect the mysterious witch. Then, once the fight was over and his Alpha gave him permission, he ran after her.
Because Virginia? The second the Nightwalkers disappeared, so did she.
With the spark of a bond and his powerful jaguar guiding him, it should’ve been easy to chase her down. Only his mate? She isn’t just a witch or a bounty hunter.
She’s a psychic, and she uses her gift to evade him at every turn.
Too bad that’s not going to stop the determined shifter…
I flee—
Virginia Stone isn’t interested in a mate.
After her ex cheated on her, she decided to put all of her time and energy toward her career. Both a witch and a bounty hunter, it’s her job to track down any troublemakers on behalf of Coventry, the largest witch coven in the States.
Capturing Priscilla Winters and bringing her in should’ve been a routine job. She’s just a lone witch, and Gin has her runes and her gifts to fight against her magic.
At least, that’s what she thought. A year after she first went looking for Cilla, the twisted witch’s dark magic has done nothing but hurl obstacle after obstacle in Gin’s path.
When she senses a hungry jaguar at her heels, she doesn’t know whether to be frustrated or flattered. Sure, Travis is a handsome and sexy and pretty possessive shifter, but she has a job to do. She can’t let him distract her, even if he seems insistent that she is his fated mate.
So, eager to follow the latest lead on Cilla while staying a few steps ahead of Travis, she miscalculates and runs right into trouble…