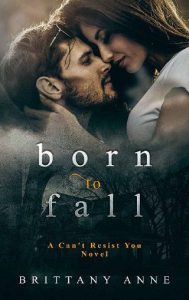 America has fallen. The world went dark. Technology, computers, cell phones, they’re a distant memory at best. The UNR controls everything within their districts in the East and the West. The people are slaves. But there is hope…
All Derek ever wanted was to save the world, and when he joined the Resistance, he thought he would do just that. That is, until he met Julia. As Derek works to fulfill his duties, he finds himself gravitating toward the one thing he thinks may bring him the comfort he works to bring others… her. He is bound to his role, which is needed now more than ever before, but Derek fears he isn’t strong enough to resist her. Can he fall for her and still save the movement, or will the entire thing crumble beneath the pressure?
Julia had been through hell, and she had no plans to go back. Lies, manipulation, deceit… that was the way of this world, and she’d have no part of it. So when she finds herself drawn to the man who lifted her up and carried her out of her prison, she struggles against herself and him in a desperate attempt to stay safe. Love is danger, after all, and Julia would rather be dead than watch her past come to life a second time.
Can they find safety in each other and bring together the people around them, or will their falling for each other lead to the fall of the Resistance?