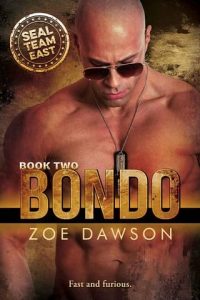 What do aircraft carriers and Navy SEALs have in common? Plenty and Bondo and the team head to the USS John Paul Jones to train the crew and innovate the process of fighting battles with near-peer adversaries like Russia and China. The world was changing and the United States Navy, a formidable power on the ocean with the capability of striking inland, needed to keep pace. Both superpowers were busy fortifying against airstrikes from carriers, and Special Warfare Operators who were adept at getting into places and eliminating obstacles were their best lethal weapons. Bondo has mixed feelings about this mission. The USS John Paul Jones was Petty Officer First Class Cameron Ryan’s duty station. The engineer had helped them complete a mission recently and thrown Bondo into personal crisis when he found himself deeply attracted to the sassy redhead. But why was he worrying? An aircraft carrier had thousands of sailors on board. What were the odds they would even come into contact?

With a huge division of aircraft mechanics, why did they have to divert her from fixing F-18s to working on the specialized subs the Navy SEALs deployed? Cameron wasn’t exactly trying to avoid the tall, gorgeous, dangerous-to-her-heart man, but being in the Navy and deployed at sea made a relationship with anyone complicated. Bondo was especially problematic because he had some issues with his past and the loss of his wife and child. To get over those kinds of hurdles, long separations hindered intimacy and forging bonds. Maybe hot sex would alleviate their interest and an affair would eventually cool. But could she take that chance?