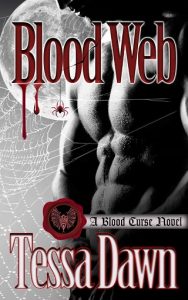 She knew she was flirting with danger, but she never meant to let the spider in…

Santos Olaru is a seasoned vampire-warrior and an unforgiving mercenary who protects the descendants of Jadon against all enemies, preternatural or human. He is also a whiz with technology and computers – a virtual ghost in any machine – who uses his unique set of talents to make problems disappear. Until now, Natalia Giovanni has flown beneath his radar, even though she has been following him through cyberspace for years…

As the only child of a billionaire whose criminal empire spans human trafficking, generational slavery, and forced prostitution, the beautiful human female has been a prisoner all her life: She has been sheltered, threatened, and exploited by her father to make his dark, seedy business appear legitimate. Unbeknownst to Natalia and her father, she has also been promised in marriage to a brutal vampire: a Dark One in the house of Jaegar who intends to use the stunning brunette to breed a son—and a sacrifice—for a soulless colony.

When Natalia hacks into Santos’ computer and places an end-around chat box on the warrior’s screen, she unwittingly spins a sticky web…and invites the spider in.

A powerful curse is set into motion; a primordial hourglass bleeds sand; and an ancient Blood Moon beckons two unlikely players to a deadly game of love and chance.