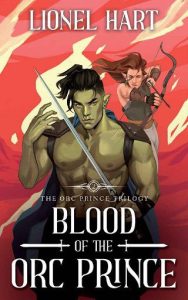 War draws ever closer, and no one can be trusted. Taegan and Zorvut have each other, but will that be enough?

The orc warlord Hrul Bonebreaker has violated the peace treaty that first brought the elven prince Taegan and his half-orc husband Zorvut together, and orc armies march upon the elves once more. Zorvut must learn to harness his latent magical ability, but Aefraya isn’t safe anymore. So with the elven king’s blessing, they flee Aefraya in the night and travel toward human lands, following a rumor hoping to find the man who is Zorvut’s true father: Tomlin Whitmore, a retired bard.
Will the human be able to help train Zorvut at all? Would he even want to? Taegan has his own doubts about Zorvut’s optimistic plan, but the thought of being apart is unbearable. They make the journey through untamed wilderness and rural villages to the beachside town where the bard was last spotted.
Although they’re further from the war front, danger proves difficult to outrun, and discerning friend from foe is far less simple while surrounded by unfamiliar people in unfamiliar lands. After all, wars aren’t ended so easily, and betrayal can lurk unseen until it’s too late.