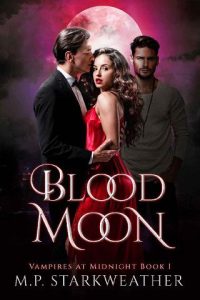 Two vampires want me, but they want to destroy each other more.

Now, I’m trapped in the middle. After discovering there was more to the secret dealings in the back of Midnight, my uncle’s bar, I’m thrust into a supernatural turf war between two powerful men. Viktor and Strain—two sexy leaders of rival corporations—not only fight over the city, jeopardizing humanity, but they also want to claim me. Neither wants to share—the city or me—and this feud might be the end of life as I know it. My trust in Viktor weakens as things stop adding up and secrets threaten my existence. As for Strain? His persistence in claiming me could get me killed.
I’m one bad choice away from losing everything, but I’m willing to risk it for the men I’m falling in love with. It’s not just my life on the line, though. My decision to allow such a claim by the two most powerful vampires could be fatal and change everything. And worse, it might destroy the human race altogether.