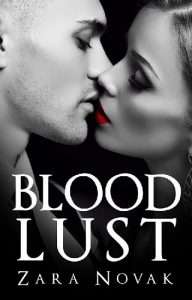 Ruby’s ability to paint the unknown often comes in handy, but even she is taken by surprise when a mysterious stranger requests her abilities for the summer. She soon learns that her elusive client is the enigmatic and handsome millionaire, Silvan Roth. Little is known about the mysterious Roth, but Ruby soon realizes that there is much more to him than meets the eye.

Silvan took an oath to stay away from mortal women. The great darkness inside of him is too strong to ignore, but even he struggles when he first sets eyes on Ruby. He needs the mysterious clairvoyant’s help to catch a renegade vampire, but it soon becomes apparent that Ruby has her own secrets, secrets that only draw Silvan in closer.
A great vampire war looms on the horizon as two powerful houses fight for control of the American bloodlines. A renegade vampire is out for blood and killing humans to find a Descendent, a rare person that can mate with vampires. Silvan is tasked with capturing the runaway vampire. He must protect his territory, keep his family safe and reconcile the uncontrollable thirst for Ruby that rages inside of him.

Love struggles against evil, fate hangs in the balance and life rests in the hands of a dark and powerful stranger. Ruby strives to escape the darkness haunting her past, but she seems doomed to face it, no matter how hard she tries…