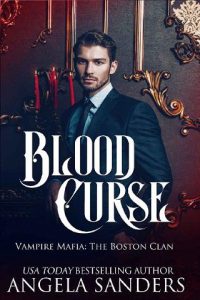 What happens when a witch accidentally drains an entire clan of vampires with one tiny spell?
It just might start a war between the Boston Clan of Vampires and Salem Witches.
Harlow’s tired of being cursed.
She’s cursed as a witch with little power.
She’s cursed by Mother Nature, and most of all, she’s cursed as the worst witch of her entire coven.
She just wants one freaking day of peace.
One.
Is that too much to ask?
Emilio’s the boss of the Boston Vampire Clan, and he’s pissed.
He’s got one mission: find the little witch who almost offed his whole family—and kill her.
He doesn’t care if it starts a war with the witches.
Emilio’s already got blood on his hands—what’s a little more?
But when he meets Harlow, he feels a spark, and it’s not freaking magic.
What’s he supposed to do? There’s only one thing, and she ain’t gonna like it.
What do they say about best-laid plans?
Yeah, they never pan out.