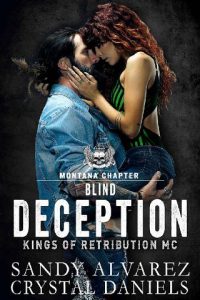 Austin Blackstone lives and breathes for his club—his family.
At the age of seventeen, tragedy brought Austin and his sister to Polson, Montana, to live with a grandfather they never met before.
His life-altering move eventually puts him on the path to finding the Kings of Retribution MC.
The club represents a strong sense of family and brotherhood. It was an easy choice to make when offered the opportunity to prospect.
Time and time again, he has proven his loyalty, and now, years later, Austin proudly wears the club’s patch.
New Orleans is where he first lay eyes on Lelani. She needs their help, and he wants nothing more than to protect her—to claim her as his own.
The moment Austin allows himself to kiss her it become his undoing.
At the age of thirteen, Lelani Mancini’s world was shattered when she lost her parents, along with her eyesight, in a tragic accident.
Lelani’s brother blames her for everything.
Her parents’ deaths leave a gaping hole in the Mancini family.
Feeling defeated and lost, Lelani struggles to adjust to a life of darkness. Though terrified of the unknown, she finds a strength within herself to move on.
Years later, Lelani uncovers a secret, with her at the center of the deception.
She puts her trust in the wrong hands, and it almost costs Lelani her life.
Those who should protect her turn out to be the ones she fears the most.
All that she has ever known is gone.
The darkness Lelani lives in is suffocating.
Until she finds light in an overprotective, tattooed Kings of Retribution MC member.
Loving Austin is dangerous.
Now, to protect her new life, Lelani is the one keeping a secret.