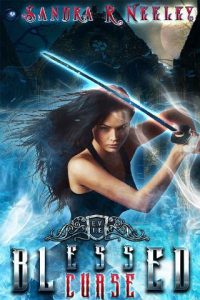 Solange has lived all her life in the shadows of the circumstances that gave her life. Raised by her great grandmother, who is Granddame of one of the strongest covens in North America, she’s trained since a very young age to seek out and eliminate all traces of the scourge that both created her and took her mother from her. Now, she’s joined an organization dedicated to the same end — all vampires must be eliminated. Finally, she finds him, the ancient who determined the direction of her life before she ever took her first breath. She plots, she stalks, she attacks. She’ll accept nothing less than success. Any who stand in her way will be struck down.

Alastair is an ancient vampire, his humanity long ago forgotten. He lives for one reason now — satisfaction, in whatever form it may come. He notices a young woman rushing through the park one fateful night. Once in his grasp, he realizes she belongs to a coven that he blames for his ultimate downfall more than a century before. This coven’s Granddame ignored his pleas for help during a rare moment of clarity. He devises a plan on the spot to plague them all without end. He takes the woman. He claims her. He mates her. Then he returns her to her coven. Little does he know, the very curse he seeks to gift the Granddame with, is the same curse that will rain vengeance down upon him.

Crispin has lived a long life, alone. He was turned against his will as an afterthought by an ancient vampire just to fill the hours of a mundane existence. Now, he wanders — lonely, watching, searching, protecting others from his creator as best he can. He moves on the outer fringes of his own kind, more of an observer than a participant. Every day blends into the next — until he sees her. She’s stalking the oldest and most dangerous of them all. She’s stalking his maker. She’s strong, graceful, beautiful, well-trained, and deadly. She’s a slayer. And she’s the first thing that’s made his cold, dead heart thunder to life since he became this new Crispin all those centuries ago. He cannot look away. Now the slayer and her target are both being stalked.

This book has been reworked, expanded by 5,907 words, and re-edited since its original temporary release as part of the E.V.I.E. anthology which is no longer available in any format.