Home
contemporary romance
Blazing for You by M. A. Lee (ePUB) 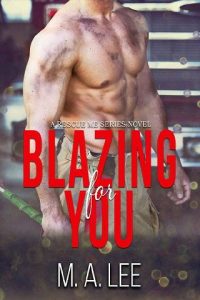 Lina left her life in Chicago and never looked back. Moving out to Sunnyvale, California, she was determined to make it on her own in the difficult world of nursing. The only problem is, she has found herself without a home and is now living out of a hotel room. Trying to remain positive, Lina throws herself into her work, but everything is about to take a very drastic turn.
Ryan has been burned more than once, and not by the blazing infernos he puts out daily as a firefighter. After his ex-girlfriend cheated on him, he decided he was done with relationships and dedicated himself to his job at Station 13. Everything was going great for Ryan until one feisty, stubborn, and sexy nurse stumbled into his life. Now, Lina and Ryan are faced with a dilemma — they are now roommates. With their sexual tension mounting, neither is prepared to face their true feelings. That is until one electrifying night changes everything.
Trying to navigate his feelings for Lina is tough, but now someone is out to set the whole town of Sunnyvale ablaze, and Ryan is forced to face his most difficult job yet. As tensions mount and romance flares, Lina and Ryan must find a way to survive through the blazing obstacles set to destroy them.