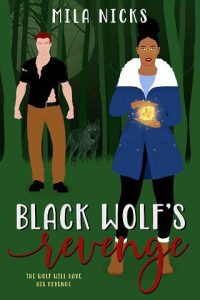 A blood feud dating back centuries…

Aiden O’Hare has lived his life certain the paranormal doesn’t exist. When he first met his fiancé, Selene, and discovered she was a lunar witch, he thought nothing more impossible could be possible.
Turns out, he was wrong. While visiting family in Ireland for the holidays, he learns a deep secret he never could’ve imagined—not only does he descend from an ancient line of lycanthropes, but he’s the true heir of the pack.
Thrust into a role he’s never known, Aiden realizes what he’s up against is no normal threat. There are no rules to this war as he comes up against a rival so ruthless, he’ll stop at nothing for revenge.
It’s a deadly balancing act, becoming alpha and protecting everyone he loves. But things between him and Selene aren’t exactly roses with so much danger forcing them apart. He can only hope to defeat the wolf seeking revenge before it’s too late and happiness slips through his fingers for good.