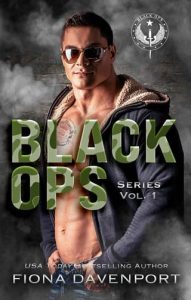 These Black Ops heroes are ready to fight for their women.

This collection includes three stories in the Black Ops series, plus 3 extra epilogues.

Rescued by the SEAL: Huntley Reed was convinced that military relationships were doomed to fail. He’d seen too many marriages go down in flames to think he could make one work. But he didn’t feel as though he was missing out until he met Cora Davis.
Loved by the Hitman: Love didn’t have a place in Merrick Ashford’s life. The former Navy SEAL’s entire focus was on his job with Ruthless Corp. Relationships were the last thing on his mind while working on a hit…until Audrey Cantrell spotted him in the middle of an assignment.
Wanted by the Warrant Officer: The last thing Deacon Walker expected when he drove one of his friends to the hospital for the birth of their child was to meet the woman who was meant to be his. But the Navy SEAL knew that he’d do whatever it took to claim Piper Amherst as soon as he saw her.