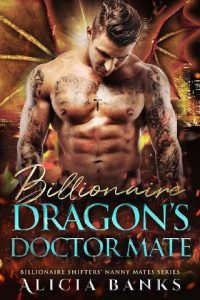 One mating ceremony and everything changed.

Destinee:
When I heard my name being called, I thought that it was the best thing ever. I was to marry Jeff, the Alpha of the clan and the man I had been crushing on for years.
Jeff wasn’t happy though. He was in love with another, and his face showed his true feelings.
I was devastated but mated with him anyway. I didn’t have a choice. He was our Alpha and even if he didn’t love me or even want me, I had to be the proper wife.
Time stood still while we tried to learn how to live together. He was out most nights, drinking with friends, while I stayed back, waiting up.
Our marriage was nothing like I’d imagined. Jeff was still just as devastatingly handsome as ever, he made my body come alive, but he’d never touched me, and I was starting to think that he never would.
All I wanted to be was the proper wife.

Jeff:
Us dragonkin have rules. The Alpha in particular has many rules imposed upon him and one of them was to be mated early in life. I couldn’t pick my own mate, mind you. One had to be chosen for me.
I didn’t know what to think of the tiny, quiet healer that I’d never really noticed before. When she was called up to be my mate, I thought there had been a mistake. Surely not her.
It wasn’t until I got to know her that I realized I’d messed up. I’d made it clear that she wasn’t what I wanted, and now I was remiss from that reaction.
Now, I wanted my wife, but Destinee wasn’t having it. I couldn’t blame her, I was acting like a jerk. Everything was coming to a head, the clan’s sapphire was stolen, and our protection was gone, members were getting attacked and even then, all I could think about and worry about was getting back in Destinee’s good graces.
I don’t know when exactly it happened, but at some point, I fell for my wife and would now do anything to make her see that mating with me wasn’t a mistake. It was our destiny.