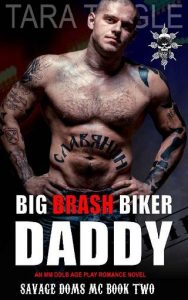 I finally found a baby boy I wanna be with forever… But forever may not last that long as a serial killer is on the loose… And he’s targeting all the littles in town.
My name’s David Terrence, but don’t you f***ing dare call me that.
Address me as Trigger. That’s my road name, and I’m damn proud of it!
Quick on the draw, quick on my feet, and quicker in stealing a lil’ one’s heart… that’s who I am.
I’m a member of the Savage Doms MC, the most notorious group of outlaws in SoCal. I ain’t just some rank-and-file one-percenter, though. I’m the sergeant-at-arms, baby! I’m third in the chain of command, and that says a lot about me and about how much my brothers trust me.
Oh yeah, just like everyone else in my club, I’m a daddy dom too. I like my boys young (still of legal age, just in case you’ve got other ideas). I like ’em nice smelling and clean. I like ’em needy and adorable. I like ’em obedient and well-mannered. And I like ’em dependent on me.
I’ve been with so many lil’ ones my entire life, but I never promised them anything. I ain’t big on commitment. I’m a fun loving kind of guy, and I wouldn’t exchange my freedom for anything.
But then, I fell in love.
His name is Alistair Jones, and everything about him was the exact opposite of my preferences. He’s strong-willed and independent. He’s cold-hearted and stubborn. He’s hard-headed and driven, the type who’d dive straight into trouble just to nab a good story. He ain’t local. He’s from out of town, a reporter who wanted to make a name for himself by starting out in a small market like Chastity.
I hated everything about him, just as much as he hated everything about me.
But that only made me want him even more.
I craved to tame him…
To subdue him…
To make him submit to my will…
To make him desperate for my care…
To make him desire the comfort of my presence…
He was a challenge I was keen to conquer.
However, a lot of things happened. The feds arrived in town. A war with the Russian mob was looming. The Santiago Cartel was beginning to make their move. And a serial killer was roaming the streets, slaughtering littles left and right in the most horrific way imaginable, leaving a trail of mutilated corpses in his wake… corpses which were wearing nothing but nappies.
The press dubbed it as the Diaper Murders.
I called it an opportunity… to show Alistair Jones that I could protect him, that I could keep him safe, that I could be the best daddy he could ever love.
But things got a whole lot complicated when a series of events made me the prime suspect of the nightmare that has befallen my town.

S**t!
How the f**k will I be able to keep my baby boy safe when fate itself is conspiring against me?