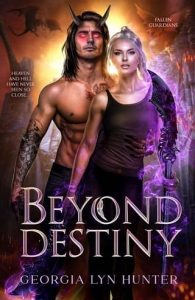 Can a creature of the dark and an angel conquer a forbidden love?

As a new Guardian, bloodshed and death become Ely’s way of life. During a skirmish, she faces off with a demon unlike any, whose sexy swagger and wicked smile throw her off her stride. Until he opens his mouth. Then she wants to kill the maddening male. Yet, every time he’s near, the draw to him is inexorable…but he’s her sworn enemy.
They call him Sicari, an assassin. Except he is something worse—a monster. Bound to a hellish existence, Nate shuns entanglements of any sort until her. A female who’s as lethal as the weapons she wields, and who cracks through his armor with just a glare. Their attraction is undeniable, but they can never be. Not when his all-consuming desire for his beautiful nemesis becomes as dangerous as his need for gore and death.
As emotions unravel, aware of the eternal heartbreak, both succumb to a dark passion, awakening Nate’s sinister nature. With enemies on all sides and time running out, Nate must sacrifice everything to protect the angel he loves. But Ely will battle the entire Dark Realm to save him, even if it means facing a fate from which there is no escape…