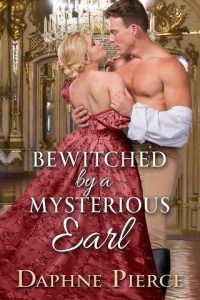 Having seeing her parents’ loving marriage, the fiery Alice Skeffington dreams of a true, passionate love. Yet, when she attends her best friend’s party, she doesn’t know that a secret marriage market has been played behind her back… Whereas she is determined to entirely avoid courtship and enjoy her time, she soon finds herself stimulated with feelings of burning passion, as a new seductive guest appears at the residence…
Could this mysterious arrival change Alice’s mind on marriage?
Lord Thomas Nott tries his best as the new Earl of Warrington, after his father’s death. His parents’ affectionless union had long derstoyed his idea of marriage, making him entirely focus on business. Although he tries to stay away from the ton, he accepts his friend’s invitation to a party that would change his life forever. When he meets the tempting Alice, he makes it clear that he is not one of the suitors lined up for her. However, the guilty spark of desire soon starts burning his heart…
What will he do when he finds himself stuck between the seductive, stubborn Alice and an old flame?
As Thomas’s strict nature collides with Alice’s glamorous world, they get tangled up in a scandalous game of lust. When marriage expectations and scheming partners start to cast their shadows upon their tantalising liaison… Will Alice and Thomas find the strength to confess their sinful feelings? Or will their fears and ambivalence destroy their only chance of flaming, endless romance?

“Bewitched by a Mysterious Earl” is a historical romance novel of approximately 80,000 words. No cheating, no cliffhangers, and a guaranteed happily ever after.