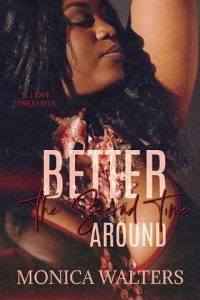 Chrissy Henderson has endured more hurt and heartache now more than ever. Finding out her husband of over twenty years isn’t the man she thought him to be has taken a toll on her mental health and stability. His actions and the demise of their marriage has brought her to her knees, but it has also strengthened her relationships with her siblings… all except the two she’s always been the closest to. During her self-preservation and self-repair phase, she meets someone who has the power to make her forget all about her past hurts and simply focus on her present with him. However, the weight of her past and situations with her family has her questioning it all.

LaKeith Douglas is searching for a love that can fill him in the most amazing way. Being divorced for over twenty years, he knows that love the second time around will be much better than the first. He’s matured and knows exactly what he wants in a spouse. A fateful meeting with Chrissy Henderson takes him by surprise, but upon first sight, he knows that she’s the woman that will steal his heart. Despite a few bumps along the way, his vision hasn’t changed, but he can only hope that Chrissy’s hasn’t either.

Past hurts have done a number on Chrissy. She is guarded and constantly questions her life choices. Can LaKeith keep her from living in her head to focus on the present with him, or is she too far gone to be swayed?