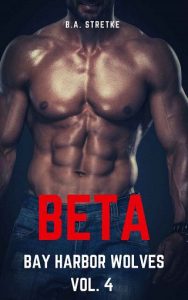 Remy is on the run, and he doesn’t know where to go. He’s tried running before, and somehow he is always found. His abusive boyfriend seems to always know where he is. He may have taken the beating of his life, but this time, he got away. Todd was drunk, and Remy walked out the door and didn’t look back. Now sitting in a bus station in Eastport, he has a decision to make. He sees someone he knows, someone, who could give him away, and he makes the fateful choice to take a seat next to a strong and mysterious looking stranger. That decision will change Remy’s life forever.

Zayn is doing Seamus a favor. Seamus, as an enforcer, has to meet and welcome new members of the Wolf Pack when they arrive in Eastport. Zayn is a Beta and doesn’t usually tag along, but Seamus’ social skills sometimes leave a lot to be desired. It seems like a normal winter night at the Eastport Station until Zayn feels the presence of the man who just took a seat next to him and breathed in the most glorious scent. This man, this stranger, is his mate. Just as soon as the realization hits him, the man is off, running to catch the next bus going God knows where. Zayn is hot on his heels. He can’t let his mate, his forever love, slip through his fingers.

There is danger around every curve and new discoveries to be made. Remy needs to learn to trust a stranger, and Zayn needs to win the heart of a fragile man wounded too many times by those who claimed to love him. Can Zayn save Remy before it’s too late? Can Remy accept the love and future Zayn wants to give him?