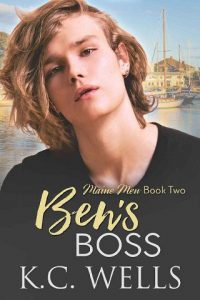 Walking into the job interview confirms Ben White’s worst fears. It’s been eight years since high school, yet he can still recall Wade Pearson’s taunts.
There’s always a chance Wade isn’t the same homophobic asshole Ben knew. Yeah right.
Except the boy Ben remembers has grown into one seriously hot, brooding man. In another life, Ben would have climbed him like a tree. Wade’s gaze still makes Ben shiver – although now for entirely different reasons.

As soon as Wade read Ben’s application, he knew he had to see him. Ben’s still as gorgeous as Wade remembers. It’s obvious he doesn’t expect to get the job, given their history.
But Wade has an agenda. He has to make it up to Ben for treating him so badly – not that Ben will ever know why he acted like he did. Seeing him every day only heightens Wade’s regret. If he’d had more courage back then, maybe he and Ben could have been something.
The least he can do is show Ben he’s changed.

There’s no way Wade can get what he really wants – Ben’s heart.