Home
contemporary romance
Beneath His Wings by Lionel Hart (ePUB) 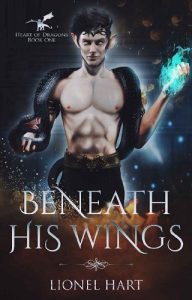 Who makes the rules for love?

Adrissu isn’t like other dragons. In fact, no one in his home of Polimnos knows he’s a dragon at all; to them, he’s the eccentric elven mage living in a tower overlooking the sea, and he’s perfectly content to keep it that way. There he can study the many mysteries of magic in peace, and occasionally step in to help the little town flourish. He doesn’t expect to tire of his life in Polimnos for a long time; but when he does, he can just gather up whatever remains of his hoard and fly away in the night to start a new life somewhere else. After all, dragons live forever.

Base draconic instincts are beneath him. He has no need to plunder and steal to increase his wealth, no need to burn and pillage only for the sake of destruction. And he certainly doesn’t believe in fated mates—no, the only being he needs is himself.
Then, after almost thirty years of living in Polimnos, Adrissu meets the eyes of a handsome young warrior, and the world comes to a lurching stop around him. The pull of fate, something Adrissu thought was a myth amongst dragons, is unmistakable. But Ruan is everything he should shun—loud, bold, stubborn—and worst of all, utterly human with a tiny mortal lifespan. Much as it pains Adrissu to stay away, he knows getting involved with a human is only going to cause him greater suffering later on. Unless…