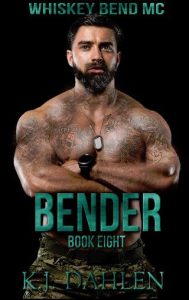 Bender
I came here to Whiskey Bend to join my brother Jinx and his friends to fight the good fight. Seven years ago, we had a mission and were hunting down a bad guy named Jack. Well, Jack found us first and he left with nothing less than devastation…
He took my brother’s wife and unborn son’s lives and damn near hung me… I survived barely. Now my brother and I are hunting Jack again and this time, he won’t get away. But Jack is also hunting someone I need to find again.
Her name is Phoebe and she’s the best friend of Jinx’s woman. She disappeared and I need to find her. Jack is coming for her and I need to know why.
I also want to know why when I held her in my arms …my soul felt complete. Which one of us will find her first, me or Jack?

Phoebe
My whole life I’ve been different. Some called me a freak but I’m not a freak. I’m just different. I’m told that I am wicked smart and I see patterns in numbers and letters.
I learned a long time ago how to hide what I was from my family and I escaped their clutches when I was just a kid. They became a secret I had to keep well hidden from the whole world.
I changed my name and learned to live under the radar. But I knew my family would always be looking for me. I had a talent they needed to keep them out of jail. Then I found Faith and in turn, she found the Hell’s Warrior Guardians MC.
Then I found out they were hunting someone named Jack. I knew I could stay but I wanted to. Oh lord, how I wanted to. I finally found someone I wanted a life with, but I couldn’t pit him against my kin.
So, I ran again. Then Jack found my trail and he was closing in. But so is Bender, I can feel it. I’m hoping Bender finds me first. Maybe he can give me something I’ve been missing all my life…hope.