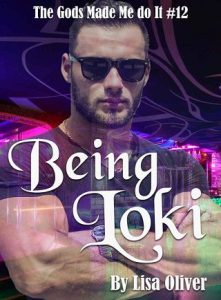 A little concerned that he seemed to have skipped the Norn’s notice when it came to getting a mate, Norse God Loki decided to embark on a path of self-discovery. He believed that the Norns hadn’t put a mate in his path, yet, because he didn’t know much about living as a mortal. So, in the interests of learning all he could about the human experience, and following a path many mortals did, Loki employed the services of a mortal therapist. And, sure enough, after following her directions, Loki found himself standing in front of his mate.
Let the loving and fun times begin…
Except, Anubis, Egyptian God of Mummification, Death, and Lost Souls, was having a few issues of his own. He wasn’t about to reject Loki, he hadn’t heard of him before, but he was too wound up in his own human experiences. They included a blond twink named Cooper, a nightclub with staff who didn’t know their place, and concerns about what he’d learned regarding Osiris during his father’s altercation with Seth.
Nobody had ever worked out if fated gods could live without each other, but with everything going on around them, Anubis and Loki might have to see if it was possible. Loki would only take a certain amount of being ignored before he did what he did best – Being Loki.
Being Loki is an MM paranormal romance story where Loki is described at one point as being something akin to an adorable puppy. I wouldn’t write about him unless I could give him an HEA, but he and Anubis do have some fun working things out. This book is intended for adults only – please store your content responsibly.

Can be read as standalone, but reading Odin’s story (Special Enough) and Seth’s Story (Reconciliation) will give you more depth about the backstories.