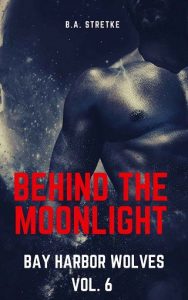 “Stay with the white wolf Sacha. He will guide you to your destiny; he will keep you safe.”

As lightning and thunder crash overhead, the young mage Sacha Ivanov stands in a field in sight of the Vampire Coven’s Chateau. This isn’t where he wants to be, but he doesn’t have any choice. His grandfather has been taken by Hunters, and every paranormal in Eastport is now at risk. The young mage finds himself drawn into a whirlwind of action as Master Cabot and Wolf Alpha Henrik Vaughn plan to rescue his grandfather and eliminate the Hunters, a paramilitary group calling themselves the Overseers. When he first meets Wolf pack enforcer Javier Lee, Sacha dismisses him as just another wolf with a chip on his shoulder. Even as Javier goads him and takes verbal pokes at him, he can’t help his attraction to the wolf. For some reason, Javier can get under his skin like no one ever has. Sacha is lost and alone. What he doesn’t yet realize is that Javier will be his salvation.

Javier knows he is being an ass. The way the young mage looked at him and dismissed him burns him in a way nothing ever has, and he can’t explain it. Negativity seems to be the only way of getting Sacha’s attention, so childishly, he does just that. Even as he tries to avoid him, he finds himself drawn in again and again to the young mage with the dramatic burgundy cloak, platinum hair, and electric blue eyes. It isn’t until a moment on the beach when Sacha’s guard comes down that Javier realizes who Sacha really is and what a mess he has made for himself. Can Javier win Sacha’s forgiveness? Can they defeat the Overseers before Sacha becomes their next victim? Does Javier even deserve a second chance at forever?