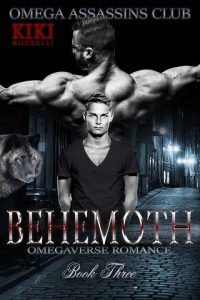 The big, bad wolf meets his match in this pint-sized assassin…

When the angel of the Omega Assassins Club, River, is given a second chance on his latest mission, he swears this time, he’ll put that bullet where it belongs, right between the eyes of the hitman who nearly killed his packmate.

Known only as Behemoth, the hulking alpha hitman is feared due to his humongous bulk, but he’s not all talk. He’s a ruthless warrior who sold his soul long ago and has spent every moment since then earning his nightmarish reputation. So, when he catches the tiny omega trying to put an end to him, he should have no problem repaying the favor.

River’s inability to kill the alpha a second time forces him to believe there must be more to the man of legends beyond the way he makes River feel warm all over. How can he feel safety in arms that have done so much evil? Behemoth’s sole goal in life has been to protect his younger brother but the things he’s done to ensure a safe future have convinced him that he is a monster—only River can see through to the good man within.

But, Behemoth made his deal with the devil and now, the devil wants his due. All he has to do his hand over his angel.