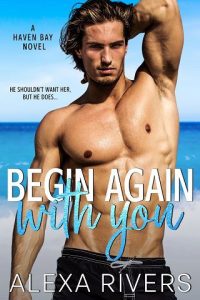 She’s a trophy-wife turned outcast. He’s the hunky librarian she once rejected. Sparks fly when he becomes her boss, but can they put the past behind them to try again?

Jobless and homeless, Charity St. John is forced to return to Haven Bay with her tail between her legs. Three years have passed since the scandal that blew her glamorous life apart, but no one in the beachside hometown has forgotten. Far from rolling out the welcome wagon, they’d rather she’d have stayed gone.
Kyle Pride has more reason to hate Charity than most. The former beauty queen broke his heart and stomped on his pride back in high school. When his manager hires Charity as Kyle’s assistant, he wants nothing to do with her. But the woman she’s become bears little resemblance to the one he remembers. Beneath a prickly outer shell, she’s hiding a heart that’s bruised and desperately in need of healing.
As things get heated in the stacks, Charity sets out to prove that she’s worthy of his love. But with the shadow of the past lingering, can they build a future together, or will everything come crumbling down?

Begin Again With You is a steamy small town romance. If you like meddling friends and family, tales of redemption, and a dash of nerd culture, you’ll love the sixth book in Alexa Rivers’s Haven Bay series.