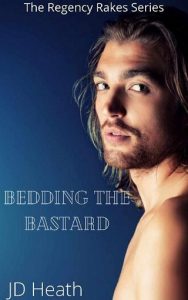 Heath Bourne is the biggest bastard in Regency London. In every way. He’s the illegitimate son of a powerful Earl who wants nothing to do with him. Society, as a whole, wants little to do with Heath, but he holds a lot of powerful men by the actual balls—a lesson he learned from his courtesan mother—and those men are so eager to have Heath they’re willing to give him whatever he desires. The one thing men seem to want, besides Heath’s body, is his heart. But Heath knows, too well, the consequences of trusting a man with his heart, and he’s vowed never to do it again.

Grayson Stone fled from England years ago, and it’s not like he had a choice. Being privately disowned by his father and brothers was bad. Having his heartbroken and being betrayed by Heath Bourne was even worse. Grayson swore he’d never return, never again see Heath or England. But a series of unfortunate deaths leaves Grayson holding the title of Duke of Rosings and with no choice but to return to England. Seeing Heath again reignites the flames—but bedding the bastard might just end up with Grayson being burned all over again.

Heath can’t trust Grayson. Grayson took Heath’s heart and handed him back a scorched lump. Grayson damn sure can’t trust Heath, for the same reason. So why can’t they seem to stop falling into each other’s bed? And, more importantly, will that happy ending they’ve always been able to find in bed ever become the happy ending they both actually want?