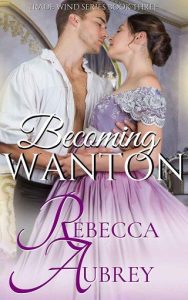 This couple’s dilemma? They’re both married…to each other.

Lord William Dalfour, Marquess of Candleton, is in a terrible fix. Oh, he knows what’s expected of him. By day, he’s to face Britain’s challenges as a notable member of the House of Lords. Night means siring heirs in the dark with his marchioness, but only with the utmost decorum. His animalistic urges…well, those are to be unleashed in the Thames Fencing Club. Or with a mistress—if he had one.
One does not engage in wantonness with one’s wife and mother of one’s children. Oh, no. One does not become enchanted by one’s wife!
A respected society hostess and devoted parent, Lady Beatrice should be fulfilled by domestic bliss and having her husband’s ear on parliamentary business. Behind closed doors, however, she dares to come into her own, asking for more and testing the limits of William’s insistence on propriety—and his self-control.
No matter the pain his rejection inflicts, William’s highest duty is to keep Bea wholesome. Isn’t it? To protect her, even from himself? From herself. But what if honoring his wife means succumbing to their mutual craving? Worshiping her, body and soul…