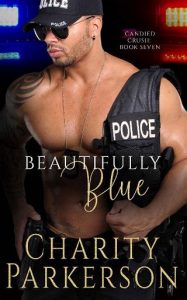 A well-known actor meets an everyday cop. What could go wrong? Everything.

When Valor met his celebrity crush, Reid King, he never expected Reid would show any interest in him. While Valor isn’t lacking in confidence, Reid is considerably younger than him and could have anyone. It makes no sense for a man like Reid to want a middle-aged cop. Unless he needs someone to save him.
In reality, Reid is everything one would expect a star to be. He’s arrogant, self-absorbed, and used to having his way. When he met Valor, Reid knew he could have the man with little to no effort. He wasn’t wrong. Reid just didn’t expect he would need Valor as much as he does.
With Reid’s past exposed for public fodder, Reid is struggling with a new sense of self. As much as he wants to be with Valor, he questions his every life decision now and can’t stop ruining everything. He worries he won’t ever be whole again. All he needs is a man in blue to rescue him. If Reid will let him, that is. It’s also possible he’s not the only one who needs saving.