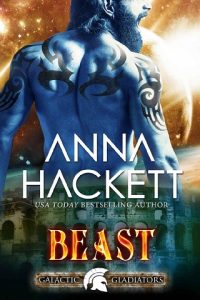 Abducted by alien slavers and taken to a lawless desert world, the last thing starship pilot Mia expects is to find herself in the protective, brawny arms of a wild, blue-skinned alien.

Rescued by gladiators on the alien world of Carthago, Mia is working to find other abducted humans who are still lost. But someone else also needs her help—the untamed alien who’s saved her twice. Rescued from vicious fight rings he’s fought in since he was a child, Vek is prone to losing control in aggressive fits of rage…and Mia discovers that she is the only who can calm him. As she finds herself drawn to the man beneath the beast, she knows that with his enhanced senses, Vek can help her find her friends.

For years, all Vek’ker has known is death, darkness, and killing. Despite his newfound freedom, he is struggling to control his rages and withdrawal from the drugs his captors used on him. Only one scent soothes him, one voice calms him, and one woman is his light in the dark. Vek will do anything to protect Mia and make her happy…including vowing to find her friends.

With the gladiators from the House of Galen, Vek and Mia follow mysterious clues into a dangerous part of the desert on the trail of the missing humans. They are drawn closer together but as they enter the deadly Illusion Mountains, they have no idea of the dangers lying in wait for them, or how far they will both be pushed to their limits in order to survive.