Home
Paranormal / Sci-Fi
BEARing it All by Jenika Snow (ePUB) 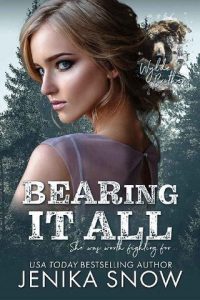 Bram Wylde was more bear than human, but he embraced it. With the need to fight regularly to let off steam, he allowed his alpha bear to run free when others kept their inner animals under control. When he saw Kenzie Harlow, a timid deer shifter with wide, innocent eyes, every possessive instinct in his body rose up. He vowed she’d be his by the end of the night.
Kenzie had only known captivity at the hands of Rook, a panther shifter who’d been so obsessed with her he kept her as his property for years.But when she finally made her escape, she didn’t know where to go. She had no one, nothing. But then she ran into Bram, a bear shifter who was more animalistic than maybe even Rook.And then Bram declared her his mate, and she knew what that meant. Forever.

When Kenzie found herself at Bram’s isolated cabin, she knew keeping her distance would be nearly impossible. The chemistry between them was too strong, too powerful to control.
But if Rook couldn’t have her, then no one would, and Bram would show the panther just how feral he really was when it came to protecting his mate.