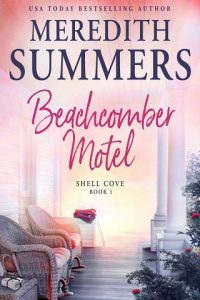 The Beachcomber Motel needs a miracle.

Jules Whittier is starting to regret the promise she made to her grandmother on her deathbed. The motel is even more dilapidated than it looked like in the pictures and it turns out that renovating it includes working with her estranged cousins Maddie and Gina—the same cousins who caused her to fail at running the last motel. But there’s no getting around the stipulations in Gram’s will, and Jules needs to make a success of the Beachcomber, not only because of the promise she made but also to prove to herself that she’s not a failure.

Nick Barlow doesn’t understand why anyone would want to renovate a dusty old hotel in a town that has no tourists, but when Jules comes in asking for the loan, he’s smitten and can’t get the application off the printer fast enough. Things are dull around Shell Cove and he’s looking forward to doing business with his new client… until his grandfather, the bank president, gives him a dire warning about Jules and her family and then refuses to approve the loan.

Maddie Montgomery has made a promise to her grandmother, too. She needs to help Jules and Gina reconcile. But, as she soon finds out, that might not be the only reason Gram sent her to Shell Cove. The town needs her special brand of optimism and organization to keep it from dying out completely.

Gina Gallagher’s life has hit rock bottom. Her real estate tycoon husband has disappeared after cleaning out both their business and personal bank accounts. When her grandmother makes her promise to learn to find joy in the little things and help out at the Beachcomber, she has no energy to refuse. Right now she has nowhere else to stay, but she doesn’t plan to keep her promise for long… until her stay at the Beachcomber yields some unexpected surprises.

None of them really wanted to come to the Beachcomber, but could the old motel be the exact thing each of them needs?