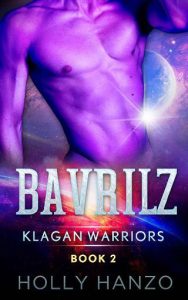 It all started when that hunky alien warrior decided to be a hero, foiling her plans to steal the stupid crystal. Meet Audrey: human, intergalactic smuggler, and woman with no memories. As far as she knows, life began when she woke up on an alien ship, surrounded by strange creatures prodding at her. Somehow managing to escape that strange hell, she stumbles across a non-humanoid alien called Hubbles, who takes her under his wing, teaching her how to survive by pilfering valuable items across the galaxy. Her most recent mission is to procure an Elodian crystal right from under their own noses, one she’s hatched a perfect plan to obtain.
That plan goes sideways when she runs into him.
Bavrilz was working undercover again, this time his mission was to intercept and eliminate the threat of an Elodian rumored to be taking over the neutral fuel stations. Wearing a terrible disguise, trying to act as inconspicuous as possible, Bav acts as a mere observer, until a small human female lands herself in shackles on the Elodian ship. Remembering the last time his inaction led to the death of a female, Bav follows the Elodians until they transfer the captive, leaping in and sweeping her away to his ship, to safety. He expects her to be grateful for his help, but what he gets in return is her anger.
Audrey was on a mission of her own, and she was determined to finish it. She commandeers Bav’s ship, demanding his help to complete her objective, and for the first time in his life, Bav finds himself straying from the planned course, eager to please the demanding female. When the whole mission goes sideways, Bav is wounded protecting her, and it’s up to Audrey to save them both.
Back on his planet, close quarters in Bav’s home have them both questioning everything they thought they knew about themselves. Will their forced proximity and shared mission lead to something more? Could a spy and a thief truly have more than just a bond of convenience?