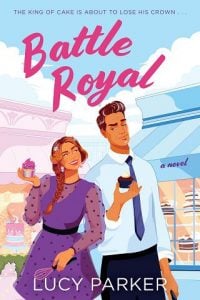 Beloved author Lucy Parker pens a delicious new romantic comedy that is a battle of whisks and wits.

Ready… Four years ago, Sylvie Fairchild charmed the world as a contestant on the hit baking show, Operation Cake. Her ingenious, creations captivated viewers and intrigued all but one of the judges, Dominic De Vere. When Sylvie’s unicorn cake went spectacularly sideways, Dominic was quick to vote her off the show. Since then, Sylvie has used her fame to fulfill her dream of opening a bakery. The toast of Instagram, Sugar Fair has captured the attention of the Operation Cake producers…and a princess.

Set… Dominic is His Majesty the King’s favorite baker and a veritable British institution. He’s brilliant, talented, hard-working. And an icy, starchy grouch. Learning that Sylvie will be joining him on the Operation Cake judging panel is enough to make the famously dour baker even more grim. Her fantastical baking is only slightly more troublesome than the fact that he can’t stop thinking about her pink-streaked hair and irrepressible dimple.

Match… When Dominic and Sylvie learn they will be fighting for the once in a lifetime opportunity to bake a cake for the upcoming wedding of Princess Rose, the flour begins to fly as they fight to come out on top.

The bride adores Sylvie’s quirky style. The palace wants Dominic’s classic perfection. In this royal battle, can there be room for two?