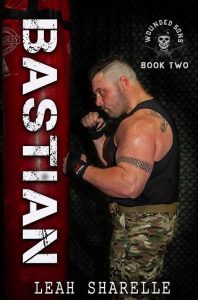 Bastian Johnston had alpha running through his veins; he was after all the son of the Wounded Souls’ sergeant at arms.
Only Bastian didn’t want the cut; he wanted the green beret and dagger patch. So, he followed his best friend and made his dream a reality, he became a soldier and second in charge of the coveted TEAM FIVE commando unit.
Life should be great, right? Wrong. His old man’s legend also followed him on every deployment, building Bastian’s resentment for the man he admired more than anyone.
His only escape was the illegal boxing matches and a curvy blonde bombshell who had completely friend-zoned him.
Wren Hickey was his best friend. She knew him, understood him and she drove him insane with lust every time she was close. It didn’t matter what Wren did; he found everything about her sexy and confusing. He knew she had the same feelings for him so, why wouldn’t she give him a chance?
When the reason came out, Bastian had a choice to make … forget the hurt and finally make Wren his forever, or move on, and look for another reason to make his heart beat.
There was really only one choice for Bastian … but was it Wren’s too?