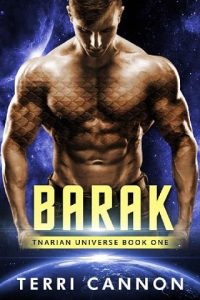 Aliens captured Lucille and many other women to experiment on, using the drug bliss. She couldn’t understand why the aliens would want her. She wasn’t supermodel pretty. Lucy is what people describe as “plus-sized” or “big-boned”. Her only redeeming feature would be her eyes. They were so blue that they were almost purple. Many men fell for her just for her odd-colored eyes. It wasn’t for her baby-making abilities. Her doctors told her she was infertile, and her would-be husband skipped town as soon as he found out.
Once she found out that he had called off the wedding and left her, Lucy got drunk at a bar. That was when some sick-minded aliens abducted her on her way back to her apartment. To top the cake? The aliens that captured her and other women crashed onto an alien planet. Unfortunately, the ship could not be fixed, and apparently, the natives were hostile. Just her luck!
Barak Von Slithe and several of his warriors were outcasts. His people did not prize their coloring and rejected them for breeders. Most Queztal females wanted more brightly colored males. They did not want males that reminded them of the sky, rivers, or dirt. They also wanted males that were more slender and easily controlled. The females did not want stubborn warriors and had a mind of their own. Now he and his warriors spend their lives patrolling the borders, keeping the nobility of their race safe.
Yet, each of them dreamt of being able to court and have a female of their own. So they build their nests and decorate them in vain. Knowing no female would ever choose them. However, when a giant fireball streaked across the sky one day, Barak felt a pull deep in his chest. Something called to him. Now, he and his warriors race across the lands of his people to find what calls to him.