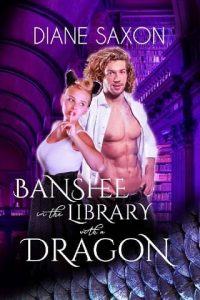 Sweet, shy librarian Ginny has a problem. Whenever passion strikes, so do the weeping, wailing voices in her head. Being half banshee, she’s already run screaming from the underworld and her female relatives, believing love will find a way with patience and faith on planet Earth.
The trouble is, humans just aren’t man enough, and every time Ginny shows interest in a male, she makes him bleed. It’s going to take more than just a simple human being to get past Ginny’s defenses.
Matthew, “The Dane,” fullback for the New York Chameleons, knows the moment he meets the little fireball that she’s his mate. For two hundred years he and his dragon have waited for a female capable of setting their world on fire. Problem is, he doesn’t seem to be able to stop her from going up in flames long enough to prove he’s more than man enough for her screaming banshee.
Will Matt ever be able to convince Ginny she’s his mate? And will Ginny get Matt alone long enough to let him appreciate her pyrotechnics?