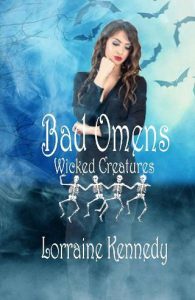 Life sucks but death sucks even more.
There is pretty much nothing worse than waking up on the wrong side of a grave. That’s how the worst summer of my life began, and it only gets worse from there.
Coming from a town full of wicked creatures is bad enough but when you have a target on your back, life can get pretty dark.
The night my mother was murdered I vowed to leave the world of darkness far behind. I should have known that my new life in California wouldn’t last. The darkness would never let me go.
It isn’t like I wasn’t warned. The omens were everywhere. Going back for a family reunion was a bad idea.
All hell breaks loose as soon as I return to Raven Falls. Someone in the Zone is trafficking in humans and my baby sister has vanished.
Did I mention that my blended family of witches and wolves is a little on the dysfunctional side?
Emergency family meetings can get chaotic when your stepbrothers want to eat you and one of your sisters wants to inflict a horrid curse on half the family.
Life gets even stranger when I meet the mysterious new owner of Wicked, a nightclub for all the creatures that inhabit your nightmares. Damian is dark, brutal, and the hottest guy I’ve ever had the displeasure of meeting.
And then there is Special Agent Trey Hill who has made it his business to keep me safe, even from myself. Not only should Special Agent Hill not be in the Zone in the first place but I’m pretty sure he has a few secrets of his own.
Last but not least, the shadowy figure that has been stalking me might be after more than just my phone number.