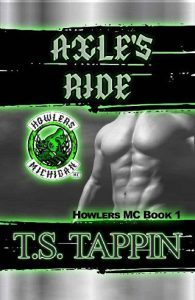 Ashlyn Taylor had no idea what she was doing when it came to raising her sister, but that didn’t matter. When their mother died, she knew she had to come home and take custody of her teen sister, Georgia. Working as a waitress at Bobby’s Bar, her world takes another crazy turn when a group of men come in wearing MC cuts and took over a corner of the bar. The man she assumed was the leader kept eyeing her. She didn’t know what to do with that. Not to mention, the last thing she needed was more complications.
Axle Weber, president of the Howlers MC of Michigan, had never had a problem going after what he wanted. And he usually got it. When he and his club stopped by Bobby’s Bar for drinks, after a long ride and a tense meeting with an ally club, he saw something he just had to have. Rather, he saw a someone he just had to have. Their waitress was gorgeous in a way that caught his attention and wouldn’t let go. He wasn’t one who usually latched on, not for long anyway, but everything in him wanted to grab hold of Ashlyn Taylor and never let go. Rival clubs, drugs, and murder plots, Axle already had a lot on his shoulders, but none of that was going to stop him. Problem was… Axle had a secret that could destroy any chance he had of finding happiness with Ashlyn. He was a wolf shifter.
Will the truth drive Ashlyn away or will a woman finally settle down Axle Weber, biker and ladies’ man?