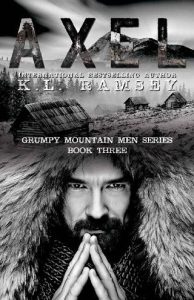 Axel had learned at a young age to trust his gut, and when he walked away from his band the night that their tour bus crashed, killing everyone on board, he wondered why he had been spared. He couldn’t get his father’s cabin out of his head, so he headed there, trying to figure out what his next move should be, but it was easier to let darkness and depression consume him rather than try to figure anything out. He thought that he was just killing time at the cabin until Cecelia showed up holding a baby in her arms—his baby.
Cecilia had no other choice but to find Axel and tell him about his son. He had spelled it out for her, in no uncertain terms, that he didn’t want kids. He said that the band being on tour and kids would never mix, and she took that as her cue to take off. She was pregnant and telling him would do her no good. She’d just have to figure out her way forward on her own and make a life for herself and her kid. Getting evicted just two weeks after the little guy’s birth wasn’t a part of the plan, and neither was living in her car. She couldn’t do that to her son. Telling Axel was her only option—she just hoped that he didn’t kick her to the curb for not telling him about the baby sooner.