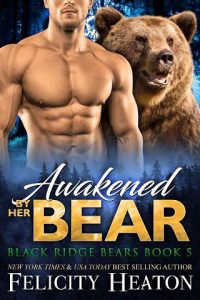 Decades in captivity and hundreds of fights in the arena have moulded Maverick into a bear with a bad attitude and a dark hunger for violence. Twenty years later and he’s still trying to let go of his past and move on, but a phone call sets him on a collision course with a female from his time at the compound—the one female he always wanted but could never have, and thought he would never see again—a beautiful bear who stirs desires best denied and wrecks his rigid control.

When Bronwyn receives a video call from an Archangel huntress who has captured her brother, she’ll do anything to save him, even condemn another to suffer in the cages in his place. But when a familiar voice answers the number of the shifter she’s meant to bring in, hurling her back in time and rousing a fierce need that has only been growing in their years apart, can she lie to the only man she’s ever loved and lure him back into hell?

If you love bear shifter romances featuring hot alpha heroes and strong heroines in an immersive paranormal romance world, the Black Ridge Bears series is for you!