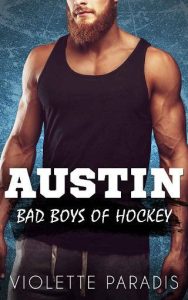 AUSTIN
I haven’t seen Grace Lawless since high school.
She was always just my best friend’s sister…
When it was my time to join the hockey league, she came to say goodbye…
And she kissed me.
Hot dang.
Before I even knew what was happenin’, she pulled away.
She’s been a ghost ever since.
I didn’t think I’d ever see her again…
Until now.
And this time, things feel different.

GRACE
After impulsively kissing Austin Berr when I was a teenager, I’ve spent the last six years avoiding him like the plague.
I still cringe in embarrassment when I think about it.
But by some stroke of serendipity, here we both are at the Applelooza fair in Tennessee.
And he’s just like he was in high school—handsome, funny, and irresistibly charming.
He’s reminding me exactly why I kissed him six years ago…
And even though he’s my brother’s best friend, he’s tempting me to do it again.