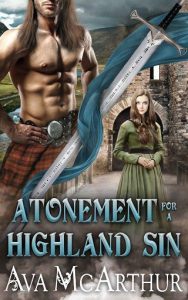 Their marriage was supposed to end a feud, not cause a war.

Maura Calbraith’s brother has committed an unforgivable mistake. While trying to defend their home from bandits, he accidentally killed the son of the neighboring Laird McGrory. Now, the Calbraiths must either let Maura’s brother, the Laird’s only son, die or go at war with the powerful McGrory clan. However, Maura has a different plan in mind.

The brave lass proposes a marriage between herself and one of the McGrorys as a solution. This way, the two clans will have an alliance, and a substantial dowry will partially compensate for the death of the beloved son. Unfortunately, this is like sacrificing herself for the sake of her brother, so Maura’s Father rejects the idea. Yet, Kevan McGrory, the cousin of the murdered man and future Laird of the McGrorys, will have the last say.

Kevan is a man of logic and wants to avoid war at all costs. But at the same time, he can not let the death of his cousin go unpunished. Thus, marrying Maura to end the feud sounds like the perfect solution. Finally, the clans agree, and Maura finds herself in a foreign castle, with a man who detests her and no friends or allies by her side…

Maura was hoping that she and Kevan would come close in time, but Kevan sees her as an enemy. To make things worse, he has a mistress and refuses to bed with his new wife! Maura is not the kind of person who would endure such treatment, and she makes it clear that if Kevan does not act like a husband is supposed to, the marriage will end.

Gradually, as Kevan discovers the kind of a woman she is, he changes his attitude towards her. However, as the two begin to bond, Kevan is seen as a traitor by his clan. And if the one ally Maura had in this place is in danger, then so is she…