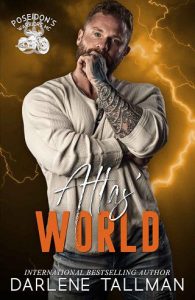 Beck ‘Atlas’ Crandall is a combat veteran, just like the majority of his club brothers that started Poseidon’s Warriors MC. A trained medic, it was his responsibility to head into missions in an effort to hopefully rescue those involved. Sadly, most ended up being recovery situations instead, which started causing him extreme mental duress. However, the last mission they were on, the one that had them all leaving once their time was up, pretty much sent him down a dark, twisted path. He’s awakened more times than he cares to admit sitting inside his closet, back against the wall, with his gun in hand. Only, he refuses to allow his brothers to find him like that, so when Poseidon mentions the possibility of him getting a service dog to help him on the rougher days, he practically leaps at the chance. He’ll try anything to appear normal once again, instead of a broken-down, former Navy SEAL who now helps run the club’s auto and bike shop.

He doesn’t expect her to worm her way into his life, but after several years of watching her during events and parties at the club, he notices that she’s spiralling and realizes that he might be able to help. That’s all he intended to do, but Fate had other plans.

Patsy Maddox, lifelong best friend to CeeCee Morgan O’Rourke, has grown used to being around the bikers. She’s never kept any secrets from CeeCee. Until now. How can she reveal her deep, dark secret about that terrible night without further losing her slight grasp on her sanity. Instead, an old issue that she thought she was long past dealing with, rears its ugly head once again. Now, she has her BFF as well as a broody, quiet biker on her to spill her guts. The only thing is, if she does, will everyone look at her differently? That’s her biggest fear—being thought of as less than. Too bad she’s got herself convinced that she’s already there.

**Suitable for ages 18+ due to adult subject matter and language**