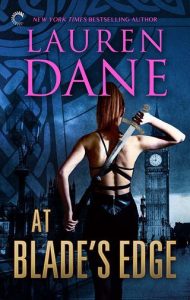 Rowan Summerwaite is no ordinary woman. Raised at the knee of The First and honed into a weapon by the Hunter Corporation, she wields ancient knowledge from the Goddess Brigid…and is newly married to a powerful Vampire scion.

Though she’d hoped the deadly events in Venice would end the threat to The Treaty she is sworn to protect, Rowan found evidence of a grander conspiracy to destroy the fragile peace that holds humans, Vampires and those with magic back from war. A war that would only hurt the weakest and destabilize the world as we know it.

It’s not so much that someone ordered her assassination that makes her angry—people try to kill her all the time—as it is the risks those she cares for, especially her new husband, now face. Clive Stewart has never tried to pen Rowan in or control her choices. He has his own fires to put out now that he’s married to the most powerful non-Vampire in their world, and Rowan knows it’s a challenge to support her the way she needs while not being too much or not enough.

The organization that gave her a purpose, a home, roots and a path when she’d run from The Keep at seventeen has betrayed her. Now, instead of on a much-anticipated honeymoon, Rowan is in London gathering her allies and the evidence necessary to drive out the rot within Hunter Corp. and expose whoever is at the top.

Rowan is a predator and this threat is prey. She’ll burn it down and salt the earth afterward. On her terms.