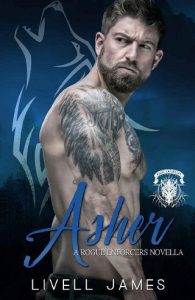 Asher Raine wanted nothing more than to be a lone wolf, traveling from place to place and living life as he pleased. He may have always dreamed of having a mate, but he never believed the romantic tales he’d been told about finding your one true mate. All he wanted to do was be free of the pack his uncle and his father had run into the ground. That was until the day he returned home to find something tragic happened while he was away and laid eyes upon the most beautiful female shifter sitting behind the window at the pack healer’s clinic.

Alyssa Waters was perfectly fine living out the life she had planned for herself. She’d dreamed of finishing nursing school and working at one of the big hospitals in Los Angeles. Never living life in a pack like most werewolves did, her family always saw fit to come and go as they pleased, never being tied down in one place. All of that changed when her uncle called her for help in his clinic for the Raine pack. It wasn’t something she really wanted to do, but the day she saw Asher Raine standing naked through the glass doors of her office, she didn’t think being stuck in the middle of nowhere Mississippi was so bad after all.

While trying to make things right with the pack that had been broken by his uncle, Asher never expected to find his one true mate. After all the evil dealing and broken promises his uncle made. Will Asher be able to stand up to him and take back the pack he’d never wanted in the first place? Or will Asher and Alyssa be destroyed by the evil doings of his uncle?