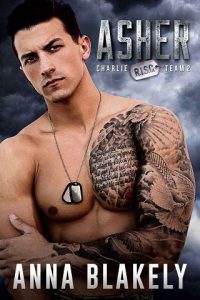 He’s a trained killer with dreams of a future…

Despite his efforts to the contrary, Former Army Ranger Asher Cross can’t forget the sexy doctor he and his team risked their lives to save. Her long dark hair and ocean blue eyes fill his dreams and fuel his fantasies. So, when Sydnee unexpectedly appears on his doorstep, alone and afraid, Asher knows there’s only one choice to make… Her.

Dr. Sydnee Blake is being watched. She’s certain of it. Convincing the authorities, however, is a whole other frustrating story. Fearing the worst, Sydnee goes to the one man she hasn’t been able to forget. The mouthwatering operative with an intense gaze and lips she longed to taste.
But this isn’t about longing or lust… It’s about staying alive. Something she’d very much like to do.

But there’s only one man she trusts to keep her safe.

Despite the lack of evidence—and his team’s concerns—Asher believes Sydnee’s claims that she’s in danger once again. Taking charge of her protection, he vows to find the man responsible for the fear in her eyes. A fear that soon proves to be very, very real.
And if he and the rest of Charlie Team fail to eliminate the threat, it’ll be Asher who suffers the most. Because a life without Sydnee isn’t a life he wants to imagine.

Asher is a tale filled with action, suspense, and passion so hot it’ll burn right off the pages. Join Asher and the men of RISC’s Charlie Team as they do what they do best: Protect the women they love.