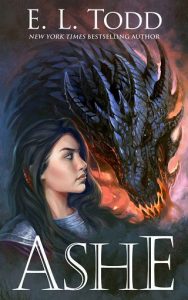 Cora’s visit with the elves proves to be more than she bargained for. She learns her parentage, but it’s the last thing she ever expected to hear. She came to the elves for help to defeat King Lux, to free the dragons still trapped in captivity, but she discovers a timeless place, where outside matters mean nothing. There’s little chance to convince them of anything, especially when her human heritage has permanently marked her as an outsider.

Rush returns to Bridge to begin their plans, but there’s also a fear in the back of his mind.

Is she safe?
Flare shares the same concern. Will they hurt Pretty?

Elven magic separates their borders, but perhaps the connection between Rush and Cora is enough to keep the channel open between them, to exchange thoughts and feelings, until she departs the forest and reunites with him once more.

Forces are moving in the world, and they have to move quickly before King Lux finds them both — and destroys them.